"When one hears Laurel Muhly-Alexander talk about her experience of spending a year in Mexico, one word comes up more than any other: family. Of course, she misses her family here in Bridgeport, but she is also very grateful for her host family she has come to know so well in Mexico, consisting of her parents and a little brother.

“We joke around like actual family,” she said, noting that the extended family also has welcomed her with open arms.
She has come to Mexico thanks to ASSE International Student Exchange Programs, one of the longest running exchange programs and works with more than 40 countries in order to provide inbound and outbound experiences.
In five months of totally immersing herself in all things Mexican, Muhly-Alexander has discovered that the people of Mexico are hardworking and welcoming. They take great pride in their country and culture and are eager to learn more about the United States and the traditions that reflect American values. She has found that, much like America, food is a huge part of the Mexican culture. She takes cooking classes two days a week with a chef who studied in Barcelona, Spain and spends time with friends at a local mom and pop restaurant. Much like grandparents in America, many locals also encourage her to eat more than she wants, but she obliges to keep the peace.
As for the celebrations during the holidays, Muhly-Alexander said that Christmas Eve was a bigger deal than Christmas Day and that New Year’s Eve involved staying up very late, followed by a day of rest and eating leftovers.
Determined to fully experience life as a local resident, she often watches television shows without subtitles and recently dreamed in Spanish for the first time. She had the opportunity to spend some time in Cancun this month and, though she truly enjoyed the beauty and history, she is grateful to be placed in a non-tourist city where the culture is rich with history.
Muhly-Alexander also recently started volunteering as an English teacher in a nearby middle and elementary school, fueling her desire to become a teacher one day. “I love giving back to the school that has given me so much,” she said. “The children sometimes ask some very strange questions about the United States and I am always amazed that they know so much about politics in the United States. They are in awe when I tell them I am from another country, and they have made me feel very welcome and special.”
Now at the halfway point of her Mexican experience, Muhly-Alexander has mixed emotions. She has established a routine there and become familiar with the language, but when she leaves her host family in June, she is concerned that she will never see them again. “When I left my own family, I knew I was going to only be gone for ten months and then return home to them,” she said. “With the host family, there is not that certainty and after making so many wonderful memories with them, I hope they stay a part of my life.”
When she returns to Bridgeport in June, she will have a rich collection of experiences on which to reflect, including time laughing with her host family, dancing, singing and traveling. She can’t wait to be reunited with her family, but she will be forever grateful for this experience. 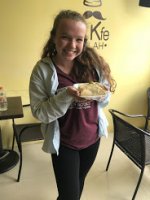 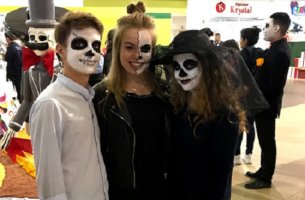